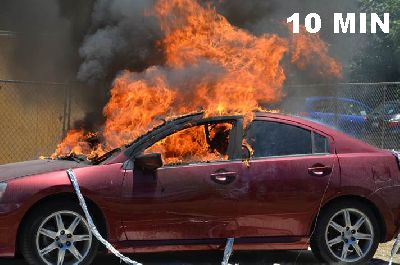 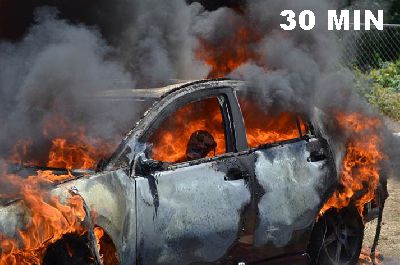 Dr. Pope has been researching burned human remains for over 10 years and collecting data from an ongoing annual course in San Luis Obispo, California, which provides realistic scenarios for different types of fire scenes involving burned human remains. Data includes times and temperatures of each burn event and the resulting condition of the body, which differs depending on the duration, fuels Involved, type of fire environment, orientation of the body to heat sources, and suppression. In the vehicle above, the calcined cranial bone is observable at 30 minutes into the fire. Cumulatively, after burning 10+ cars, a generalized burn pattern emerges that can be applied to new and ongoing forensic casework with similar conditions. In the vehicle pictured above, the 10 minute fully engulfed fire burns around the body. The outermost soft tissues burn, leaving muscle and bone exposed. After 30 minutes, the flames recede into the vehicle, making the body visible in its partially calcined state.

The process of pugilistic positioning during the fire with the fingers, wrist, elbow, and shoulder repositioning from

shrinking muscles that pull on bones, thus moving the limb. This resulted during a structural fire.

Dr. Pope completed her dissertation The Effects of Fire on Human Remains: Characteristics of Taphonomy and Trauma from the University of Arkansas in 2007 and has since continued her research. She has extensive knowledge about how the human body burns in accidental and criminal fire settings. Annually, she collects field data and conducts a training course in San Luis Obispo, California with the San Luis Obispo Fire Investigation Strike Team (www.slofist.org), which teaches Law Enforcement, Fire Investigators, Coroner/Medical Examiners how to handle and process a variety of fatal fire scenes.

Dr. Pope’s research has been published in the Journal of Forensic Sciences: Identification of traumatic injury in burned cranial bone: An experimental approach 2004;49(3)431-440 and in the International Association of Arson Investigators: Exploding Skulls and Other Myths about How the Body Burns 2004;55(4)23-28. Some of her additional research interests include Skeletal Trauma, Burn Patterns to the Human Body and Injury Patterns, and Identification of Fragmentary Burned Bone.

Elayne Pope Ph.D. is a Forensic Anthropologist and the Autopsy Supervisor at the Tidewater Office of the Chief Medical Examiner in Norfolk, Virginia. She oversees cases of skeletal trauma during autopsy. Likewise she is an expert with burned remains that pass through the office involving accidental, homicide, and suicide as manners of death. Variations of these types of traumatic cases are replicated in the field under similar conditions; with live burns involving human cadavers in order to test and validate theories about how the body burns in a variety of fatal fire scenes. This is done in conjunction with field training alongside seasoned Fire Investigators, Law Enforcement, CSI/Coroner, and other scientists annually as ongoing research.

This site and all of its contents are for educational purposes of the forensic science community. Images and materials are copyright protected.